On October 21, 2021, an A-List actor accidentally shot and killed the cinematographer on his movie set.  That a Hollywood star was the shooter is the lead.  In the October 22, 2021 edition of Inside Automotive, the linked headline story is the Variety article titled “Alec Baldwin Fired Prop Gun That Killed Cinematographer Halyna Hutchins, Injured Director".  The first two words of the title names the actor, because that is the lead.

Instead of using a headline link label with the lead information, Ed Wallace obfuscates the event by linking to three different versions of the Alec Baldwin homicide story.  The actor’s name does not appear in Inside Automotive headline.  Despite the actor’s name prominent position in the linked article’s title, Wallace labels his link to the article as “Prop Gun Kills Cinematographer, Wounds Director”.   Furthermore, the actor's name does not appear in Inside Automotive second heading / link label to the story.  No, it is not until the third heading / link label that the shooter’s name appears, although as “Alex” instead of “Alec”. 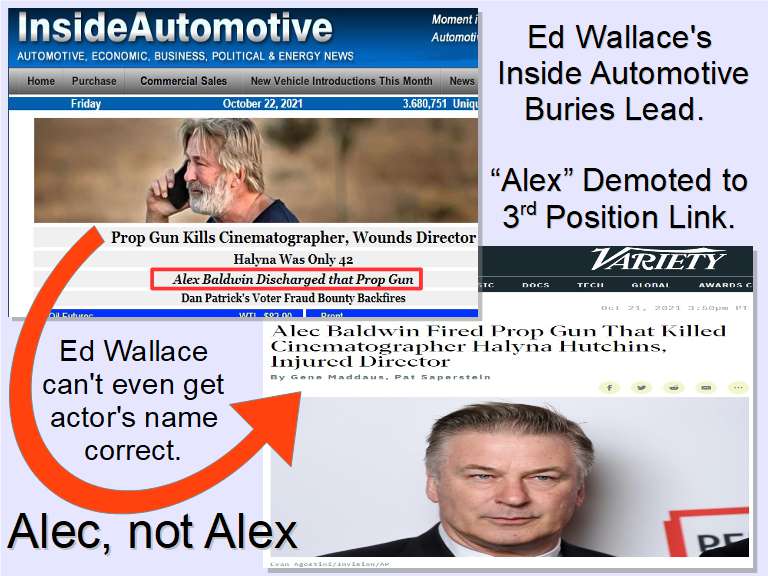 While reticent to publish Alec Baldwin’s name, Ed Wallace does link to newer articles covering the homicide on each of the next three days.  One would think that by the fourth day, Wallace would report the well-known actor’s name correctly.  Yet, on October 25, 2021, Wallace continues to refer to Alec Baldwin as “Alex" Baldwin. 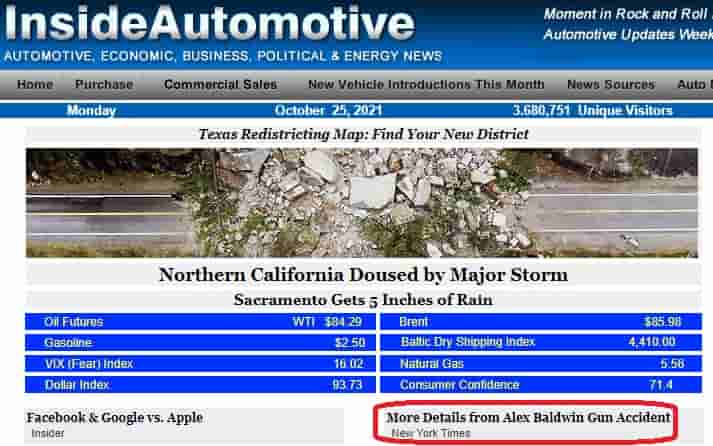 As to why Wallace would obfuscate Baldwin's involvement with the shooting, one could speculate that Ed Wallace wishes to shield a kindred spirit who shares his views.  After all, just like Ed Wallace, “Alex” Baldwin was once from California too.

The day after this report, Ed Wallace again referenced Alec Baldwin as “Alex” within a link label to a newly added article of the October 26, 2021 edition of Inside Automotive.  Then, for the rest of the week, Wallace stops using Baldwin's first name within any of the link labels of newly added Baldwin-related stories to which Wallace links.

Finally, in the Sunday October 31, 2021 edition of Inside Automotive, Wallace gets the first name correct within a link label to Alec Baldwin.

In the November 11, 2021 edition of Inside Automotive, "Alex” Baldwin returns as Ed Wallace again mislabels a link to a story about Alec Baldwin.  The story is about Alec Baldwin being sued by a Rust crew member.  The cause for this repeated name error is either intentional obfuscation or incompetence. As for which, there is ample evidence both throughout Wallace's work.