If one word could describe the January 14th broadcast of Wheels with Ed Wallace, that word would be CONTEMPT.

·        Contempt for any co-host who does not present or analyze his stories is the manner that Ed demands, so Wallace repeatedly activates his microphone to takeover the presentation that his co-host started.

·        Contempt for anyone who does not subscribe to Wallace’s zeal for an ever-expanding government, so that group can be summarily dismissed as greedy and treacherous.

·        Contempt for an old friend who is just too dense to know his own mind, so when his friend says that his pronoun is conservative, “woke” Wallace purposely misgenders misaligns his friend with the opposite political orientation.

During the last hour of that broadcast, an old friend of Ed named “Gene” called into the show to discuss Wallace’s nominal retirement. The discussion quickly devolved into geriatric reminiscing over of old times, with Wallace meandering into a tale of wearing a propeller beanie to a dinner with a mobster. 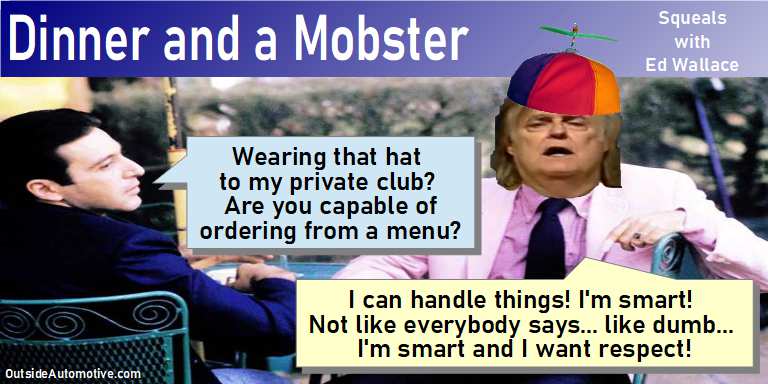 After that detour, the following with Ed “Fredo” Wallace transpired:

In Wallace’s world, only those who share his far-left views are truly generous and loyal. Ed believes that those with the gall to disagree with him are bad people. So, for Ed Wallace to maintain his close friendship with Gene, Wallace pronounces that his friend is merely a confused hypocrite, asserting what Gene says is very different from what Gene does. So Ed reassures the audience that Gene is a wonderful person, because Gene is not really one of those nasty right-wingers.

Nominal Wheels host David El Attrache, to his credit, immediately objects to Wallace’s declaration that conservatives are not there for friends. But that credit only goes so far. By co-hosting and sponsoring Wheels, El Attrache’s enables Wallace to spew his partisan bile over the airwaves. There are many conservatives within the Norm Reeves Honda dealership’s customer base. As general manager of that dealership, why does El Attrache participate in a show that regularly insults them?

As for nominal Wheels host John Ingram, his reactions are just his latest sycophantic affirmations of anything Ed Wallace. Readers are advised to keep this latest instance in mind for future reference.