On July 18, 2021, Outside Automotive noted that Ed Wallace never recommends a Mercedes vehicle to callers and asked: Is this exclusion because Wallace lacks having a Mercedes dealer as a sponsor?  That question has now been explicitly answered.

During the September 18, 2021 edition of the Wheels with Ed Wallace show, a caller from Caddo Mills ♫ asked for Ed Wallace’s impressions regarding a Mercedes SUV.  Normally when asked about a vehicle, Ed Wallace inquires why the caller is interested in the vehicle and then tells what he knows about the car.  Additionally, Wallace often compares and suggests other vehicles that match the given criteria. Furthermore, Wallace is familiar with similar Mercedes SUVs, having recently reviewed on Fox 4 News the 2020 Mercedes GLC 63, 2018 Mercedes GLS 63 AMG, and the 2016 Mercedes GLS 550.  All three feature the desired “♫ boxy style of the Mercedes".

Unfortunately for the Caddo Mills caller, Wallace has no Mercedes dealership as a sponsor.  As such, there is no discussion or comparison of the attributes of the Mercedes SUV.  Nor does Wallace convey his review experiences with similar Mercedes models.  Instead, Wallace provides an irrelevant history lesson of why he lacks a Mercedes sponsor.  ♫ Wallace concludes that he would recommend a Mercedes, but only if one of his “friends" like the Sewell family had a Mercedes dealership.  Since Wallace cannot refer the caller to a Mercedes sponsor, Wallace declines to even provide any insights on the Mercedes SUV despite being familiar with them.  No pay?  No play!   Ed Wallace serves one master. Its not you. 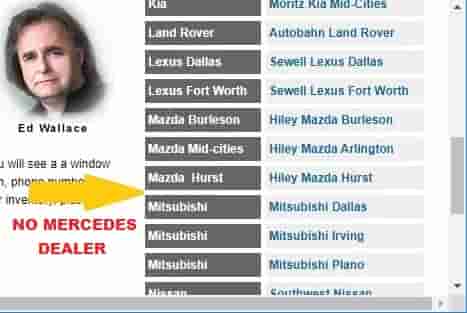 Ed Wallace: No Mercedes for you.

Given that Wallace admits that he predicates providing vehicle advice upon who sponsors him, how else do these sponsors influence his recommendations?  Does Wallace steer the audience to one model over another due to what is on the dealer's push list instead of which model would best serve the caller?

To conclude, almost every week, Ed Wallace reminds his audience that he does not assist those who do not purchase vehicles from his sponsors.  This is often accompanied by Wallace recounting a new tale of assisting an audience member when their transaction went bad with one of his sponsors.  Well, if these dealers really are the “best of the best", there should not have been a failure whose resolution required the intervention from some radio host.

2021 October 13 -  Wheels with Ed Wallace Repeatedly Fabricates Caller to Disguise a Lack of Audience
It appears that “Lance in Caddo Mills" is not a real caller.