The September 21, 2021 edition of Inside Automotive headlined a false narrative.  On his link aggregation site, Ed Wallace adulterates the top link by changing the Guardian’s article's title from "White House criticizes border agents who rounded up migrants on horseback" to "Rounding Up Haitians With a Horse and Whip". 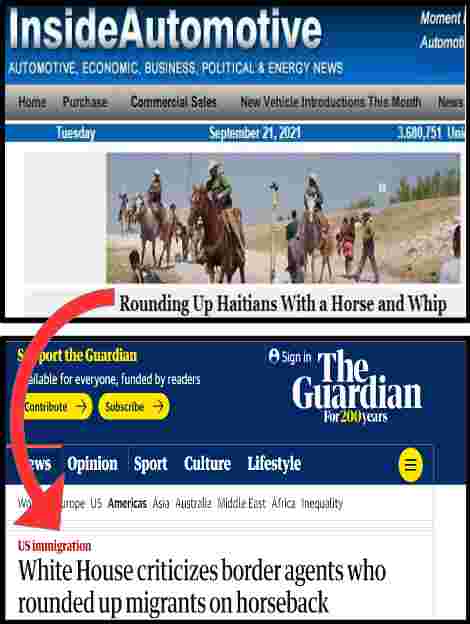 Border agents do not carry whips.  The straps are long reins with which to control the horse.  But facts do not matter to Ed Wallace, so now these standard-gear horse reins are tools for a reign of terror.  To whip his readers into a frenzy, Wallace trades in the false narrative of ‘whips'. 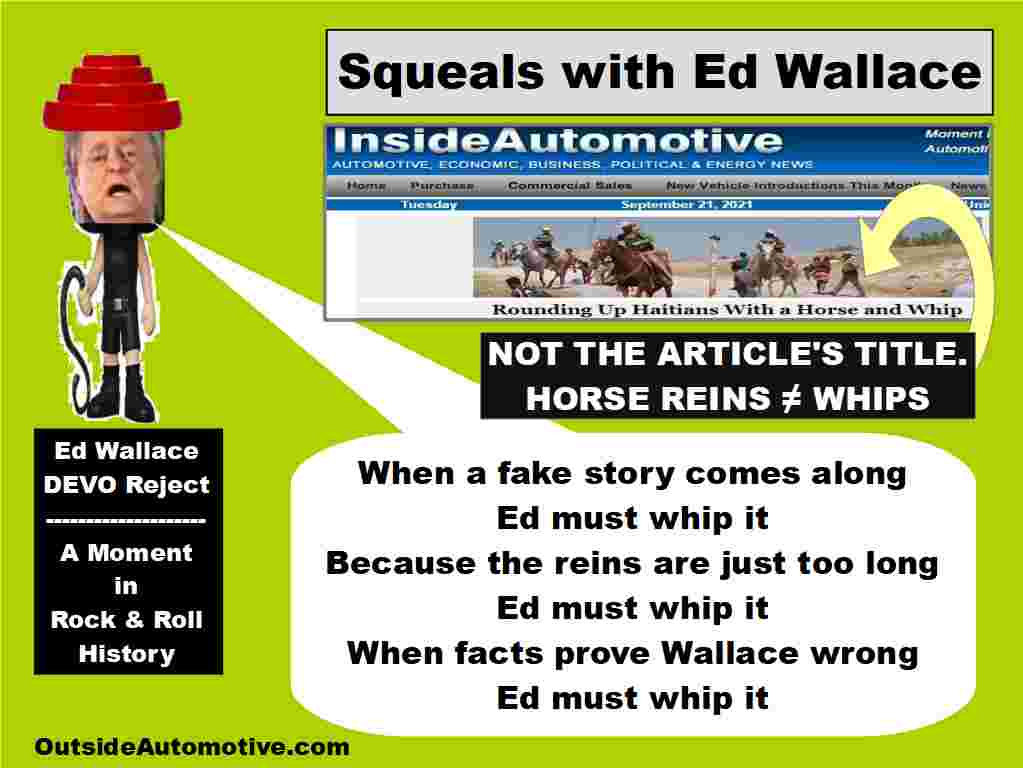 The September 23, 2021 edition of Ed Wallace’s Inside Automotive links yet again to the ‘rein of terror’ narrative.  This time, Wallace implicitly concedes that there were no whips by pushing an altered narrative with the link label "Border Patrol Uses Reins Like Whips”. 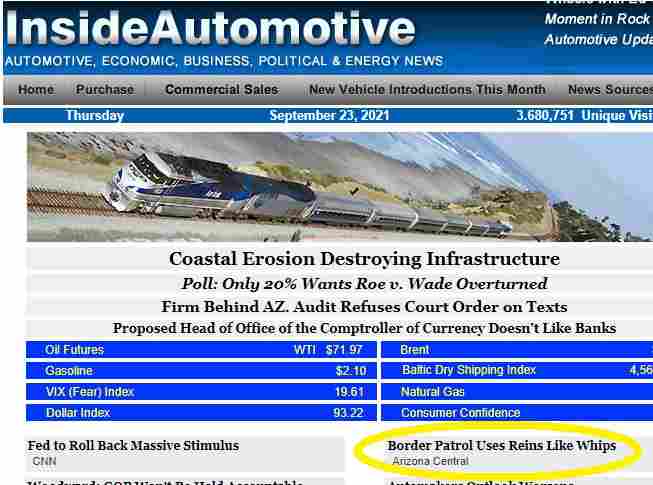 To substantiate that narrative, Ed Wallace links to a news report that presents evidence of that novel assertion.  No, sorry, that would be ethical conduct which is not Wallace's modus operandi. Instead, Wallace links to an OPINION piece by open borders partisan Elvia Diaz, whose twitter account has the tagline “Immigrants (We Get the Job Done)" and consists of numerous tweets promoting the open borders position.

In stark contrast to Wallace's linked opinion piece, KTSM interviewed Paul Ratje, the Las Cruces, New Mexico-based photographer whose images ignited the firestorm over the use of reins.  Ratje was standing on the Mexican side with an unobstructed view of the events.

From KTSM: “I’ve never seen them whip anyone,” Ratje said. “He was swinging it, but it can be misconstrued when you’re looking at the picture.”

KTSM Anchor Christina Aguayo and Photojournalist Johnny Munoz interviewed sixth generation Rancher, Kerr Wardlaw:  “Wardlaw explained that the agents who appeared to be swinging their reins in the air were actually using their reins as a tool, to quickly move the rear end of the horse from left to right. He said that the agents were using non-lethal force by using their horses as tools"

Given Wallace’s prior retaliation against a generational rancher making assertions that conflict with his false narratives, Outside Automotive advises generational rancher Kerr Wardlaw to prepare for if and when his date of birth, family member names, gender history, parental funeral website condolence entries and other identity theft inputs are broadcasted to the KLIF audience.