The May 2nd leak of Supreme Court Justice Alito’s draft opinion launched extensive activity on Ed Wallace’s Inside Automotive web site.  Over the course of the subsequent 11 days since that leak from the Supreme Court of the United States (SCOTUS), Ed Wallace has published 76 links to related news articles, opinion editorials, and opinion editorials masquerading as news articles.

Click on the following graphic to view all of the Inside Automotive web site links, link labels, and publisher’s name associated with abortion rights since that SCOTUS leak:

Ed Wallace claims that the Inside Automotive web site provides nonpartisan news aggregation.  All of the above raw data allows one to put this claim to the test.

Of the 76 articles linked, 12 articles were neutral in tone.  An article was classified "neutral" if it was a news article that presented all the facts and is balanced in the presentation of opinions on abortion rights.  News services, such as the Associated Press, provided the bulk of the articles classified as neutral. A few articles from left-leaning news sources were balanced enough to qualify.

Of the 76 articles linked, 64 articles were “pro-choice” in tone.  An article was classified “pro-choice” if it overwhelming presented a positive tone towards abortion rights and its supporters or overwhelming presented a negative tone towards the unborn’s rights and its supporters.  These pro-choice articles range mostly came from left-leaning mainstream media sources such as the New York Times and NBC News.  Some came from very leftist publications such as Daily Beast, The Atlantic, Vanity Fair and Salon.  And a few came from sources one would not normally associate with the left, such as Scientific America.  Some articles criticized the legal arguments of the opinion.  Other articles detailed alleged degradations to health and freedoms.  Others simply threw insults at the conservative Supreme Court justices.

Of the 76 articles linked, 0 articles were “pro-life” in tone.  An article was classified “pro-life” if it overwhelming presented a positive tone towards the unborn’s rights and its supporters or overwhelming presented a negative tone towards abortion rights and its supporters.  There was not one link to any article that presented a favorable treatment of the leaked SCOTUS opinion legal argument, the conservative Supreme Court justices, or any potential positive results from the repeal of Roe V Wade.  In fact, the only source to which Wallace linked that is some consider a right-leaning news source was Fox News.  Wallace linked to one article from Fox News whose contents was a summary, without any rebuttal, of insults found within a New York Times editorial by far-left columnist Maureen Dowd (i.e. calls Supreme Court Justice Alito a ‘holier-than thou preacher’). 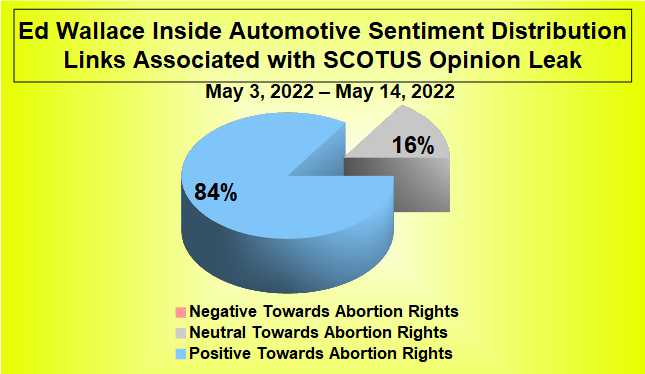 On the eleventh day, during the May 14, 2022 edition of his KLIF Wheels show, Wallace states that he is aware that many scientists and doctors hold pro-life views.  Yet, Wallace never links to any news article or opinion editorial that covers that perspective or its supporters in a positive light.

Ed Wallace:
… I think there are people in science and medicine that actually go on either side of it.  But I think that the majority of science and medicine are on the side of people should have those rights.  I don’t think it's.  You know, you know, Thomas.  I am a simple guy.  I don’t know why it is still an issue today.  Help out Planned Parenthood or make it to where you never have to do that stuff anymore.  Huh?

Thomas:
Yeah, Ed, that would be nice

I mean, it's been 40 years.  But, the thing is.  If you want to get rid of it, so OK, here is how we are going to help poor women that were in the past forced into this.  I mean, that that doesn’t seem hard to me.  But, it’s this all-or-nothing something is hard for me.

Ed Wallace laments that “this all-or-nothing something" is hard for him.  No, it seems very easy for Wallace.  When ALL non-neutral sentiments linked from his site are positive towards abortion rights and those who support such.  And there is NOTHING linked that is positive towards protecting the unborn and those who support such.  Then, Ed Wallace actions expose his words for the lie that they are.  Ain't that SOMETHING.