Frequently during his Wheels radio show, Wallace attempts to bolster his claim of being nonpartisan by declaring that he has not voted since 1976. What Ed does not tell his audience is that he contributed to the America Coming Together (ACT) political action committee during the 2004 election cycle.

What was the ACT?

”One of the leading Democratic interest groups dedicated to defeating President Bush in November. Run by longtime Democratic operatives and financed in part by wealthy Democratic donors."

And who funded ACT?

”It was primarily funded by Peter Lewis, George Soros and labor unions (especially the Service Employees International Union. ACT was led by Steve Rosenthal, who is the former political director for the AFL-CIO." 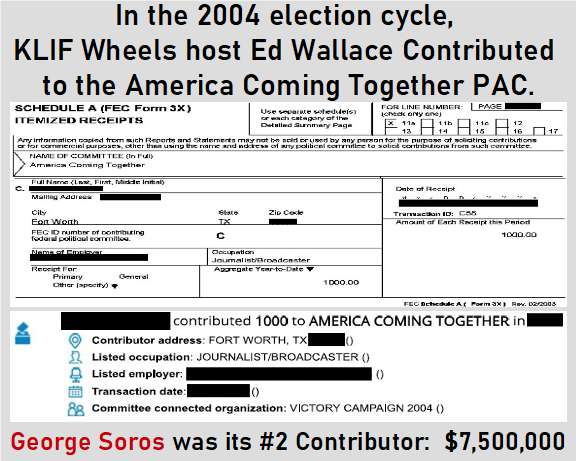 Soros funds the Open Society Foundation (OSF), from which all manner of things progressive receive millions. It also funds (directly or indirectly) far left publications, which are often the source of articles to which Ed Wallace's Inside Automotive links.

Another recipient of a political contribution from Ed Wallace was Elliot Spitzer's 2006 campaign for New York governor, who is a Democrat. Having won that office, Spitzer later resigned as Governor due to his alleged involvement with a prostitution ring. Such is the quality of individuals whom Wallace backs.

At this time, Outside Automotive could not find any other political contributions by Wallace. As such, it appears that only Democrats receive his largess. And given this fact, Ed’s rationale for not voting is completely undermined.

By his own standards, Wallace failed to maintain a degree of separation. For when one is giving a vote or giving a check, one is equally involved. So, however you encounter Wallace, be sure to look for the union label. Or, to be even more accurate, look for the Soros label that Wallace has affixed to himself.