On this Thanksgiving, Outside Automotive gobbled up top positions in the Bing search engine results for “Ed Wallace Inside Automotive".

This holding of the #1 pole position will be gone tomorrow. But worry not; Outside Automotive is now consistently presented as one of the top five results for searches conducted for Ed Wallace across all the major search engines such as Google, DuckDuckGo, Bing, and Yahoo.

What is particularly interesting about the Bing results is the generated sidebar: 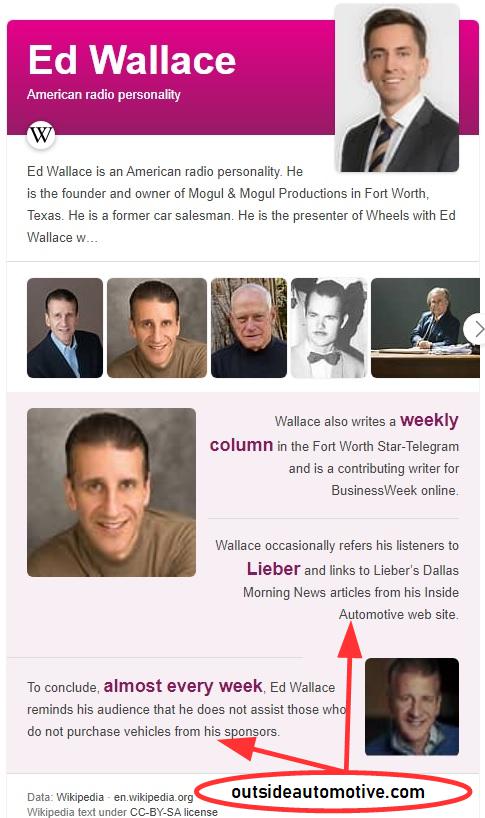 The above sidebar consists of text pulled from Wikipedia and from Outside Automotive (half each). Over the past few months, that sidebar has highlighted the following:

"During his show’s July 16, 2022 broadcast, Ed Wallace set the end date for his Wheels with Ed Wallace radio show on KLIF.”
”To conclude, the reality is that Ed Wallace manages to CONNECT the partisan snark over the last FOUR months in a manner that presents a mirage of a less biased posture."
”This is Ed Wallace go-to move when facts do not support his false narratives (i.e. Wallace’s promotion that border patrol used whips, which was an obvious lie).”
”Wallace occasionally refers his listeners to Lieber and links to Lieber’s Dallas Morning News articles from his Inside Automotive web site.”
”To conclude, almost every week, Ed Wallace reminds his audience that he does not assist those who do not purchase vehicles from his sponsors."

Obviously, the Bing search engine itself is flawed as the associated headshot displays the wrong “Ed Wallace’. Never the less, it is telling that the Bing search engine ranks Ed Wallace’s own web site (InsideAutomotive.com) lower than OutsideAutomotive.com as an information source for his sidebar. And it is quite amusing that what Bing highlights in that sidebar often exposes Wallace for the menace he is.