Somehow Ed Wallace reliably pushes the Democrat talking points, despite his repeated claims of being nonpartisan. Yet another conspicuous example occurred yesterday, when it was reported that Biden kept top-secret government documents from his time as vice president at a private office used for university work. 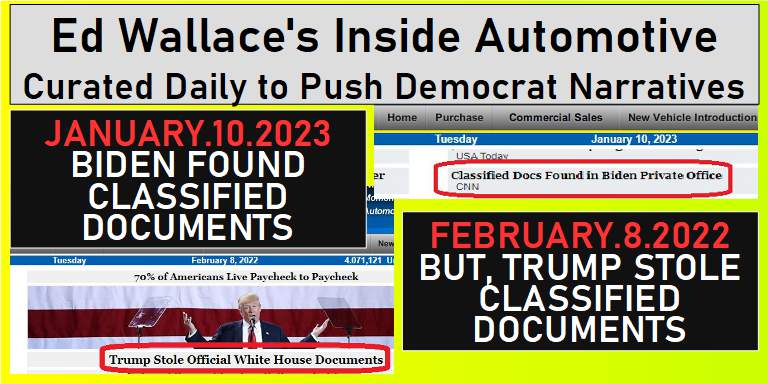 Wallace dutifully labels the link as innocuously as possible. And the story is positioned far down on the Inside Automotive page in the 34th position. When one looks past the benign link label, one quickly finds that Biden's retention of these documents was illegal. Vice Presidents cannot declassify documents. And no government agency had secured the private office in which top-secret records were found.

Contrast the above to Wallace's treatment of the controversy over classified documents held by President Trump at Margo Largo, which is under Secret Service protection. The link to the article appears in the 2nd position of the headline section, near the top of Inside Automotive in a larger font. Furthermore, Wallace uses its link label to accuse Trump of having stolen the documents. If one reads the article to which Wallace links, the words "stole" or “steal" appear nowhere within that article’s title or contents.

Ed Wallace has long ago dispensed with any pretense of honesty or integrity with his link curation on his Inside Automotive web site.

On the first day reporting the story, Ed Wallace downplays Biden’s mishandling of classified documents by giving the story’s link a benign label and a below-the-fold placement. Unfortunately for Wallace and his ilk, the story did not disappear.

On the second day, Wallace then moves onto his favored tactic when the facts belie his preferred narrative. This conduct is highlighted by the Bing search engine results sidebar. 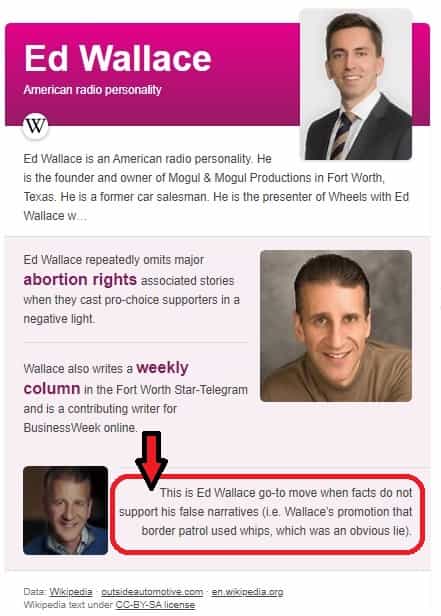 The specific go-to move to which Bing refers is to link to an opinion editorial that presents Wallace’s preferred narrative for a news story. It is a ploy to trick readers into thinking some leftist hack’s opinion is fact. In this particular case, Wallace links to a Washington Post opinion editorial labeled as an “analysis".

The author pleads that Biden’s conduct is not comparable to Trump for reasons such as that there are only 10 documents and that the documents were all located in one place. Those assertions had a shelf life of less than a day; as yet more classified documents were "found" at a second location (as per NBC News). But this whitewash is not enough for him, as Wallace also positions this pro-Biden editorial far down the page in the 26th position.

One can expect more dishonest curation from Ed Wallace on the third day.

On the third day, Ed Wallace dutifully follows the mainstream media's shift away for denial and minimization. And with that, the news of Biden mishandling classified documents rose from the depths of the Inside Automotive article links into 3rd position of the headline section. 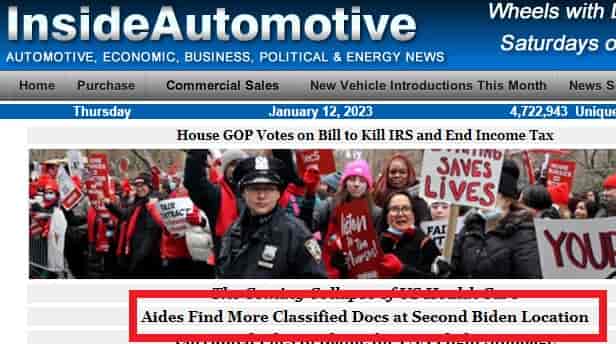 One might conclude that Wallace was shamed into giving the scandal its proper weight.

On the fourth day, the news of Biden mishandling classified documents took Inside Automotive’s 1st slot.

While the placement is prominent, one should note that Inside Automotive presents what it considers its most important story as the link label with a larger font along with an associated page-wide hero image. So, for Ed Wallace, the most important news from yesterday (January 12, 2023) was the death of celebrity Lisa Marie Presley.

Contrast the above presentation to Ed Wallace’s presentation of the controversy over Trump’s handling of like documents when it was first reported. The associated headline was the most conspicuous with larger font, associated hero image and a pejorative link label that asserts theft when the article itself describes an ownership dispute.

What was most egregious is that Wallace buries the lead. While he does link to two stories on the left-leaning Politico site, the link labels applied (“Biden in a Hole of His Own Making” and “Documents Found in Biden’s Garage”) omit the appointment of special counsel to investigate Biden. How important is the appointment of a special counsel? Important enough that Attorney General Merrick Garland held an unplanned press conference to announce it.

A fair-minded curator would have gone with the headline: Special Counsel to Investigate Biden Document Handling

But Ed Wallace is not fair-minded. And with that, the bias of Ed Wallace’s Inside Automotive’s curation is exposed further.

Outside Automotive has never claimed to be a master of the obvious. As such, it only just occurred to check how Ed Wallace reported the appointment of the special counsel for President Trump. Inside Automotive reported that news within its November 19, 2022 edition as such: 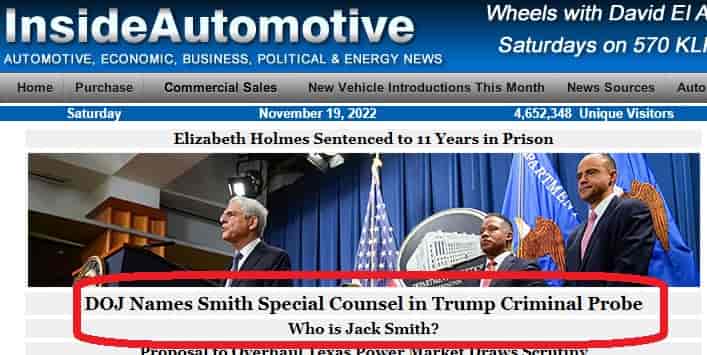 As expected, Ed Wallace’s two-tiered system of curation raises its ugly head. News of the naming of a special counsel in the Trump case is done in the most conspicuous manner possible. Related headlines take both the 2nd and 3rd positions, each with the larger font. Above those two link labels is the related page-wide hero image of Attorney General Merrick Garland at the podium announcing the appointment.