In the April 17, 2022 edition of the Inside Automotive web site, Ed Wallace applies a link label that conveys the exact opposite of what the story reports.  This is one of the more blatant examples of the false narratives in which Wallace peddles.  Ed Wallace links to a news article with the label “Third Night of Right Wing Unrest in Sweden".  The link label misleads the reader to believe that a right wing group is disrupting Swedish society.

The link is to an article on The Guardian site whose title actually is "Third night of unrest in Sweden over far-right anti-Islam rally".  The subtitle explains further with "Demonstrators threw stones and burned vehicles during a protest against an anti-Islam event organised by Danish far-right Stram Kurs party". 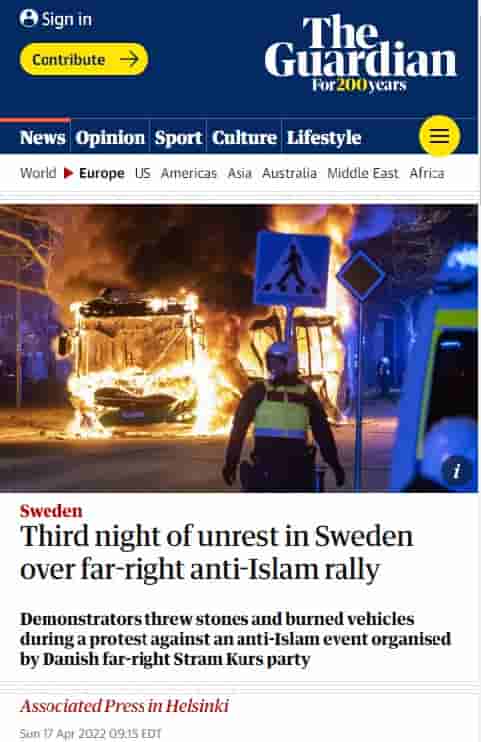 So, it was not the “right wing" causing unrest as Wallace misleads the reader to believe. The Stram Kurs party's demonstration had gathered all required legal permits and would have ran without incident.  It was those that share Ed Wallace’s sympathies that violently disrupted the event and caused unrest in Sweden.

From The Guardian artcle:  “Kim Hild, spokesperson for police in southern Sweden, had said earlier on Saturday that police would not revoke permission for the Landskrona demonstration, organised by the Stram Kurs party, because the free-speech threshold for doing that is very high in Sweden”

As first exposed by his whitewashing of the BLM riots, Ed Wallace repeatedly minimizes the violence against persons and property when sympathetic to the perpetrators.  And conversely, Wallace exaggerates and manufactures tales of violence against persons and property when hostile to the perpetrators.  Those are the actions of a propagandist, not a reporter.