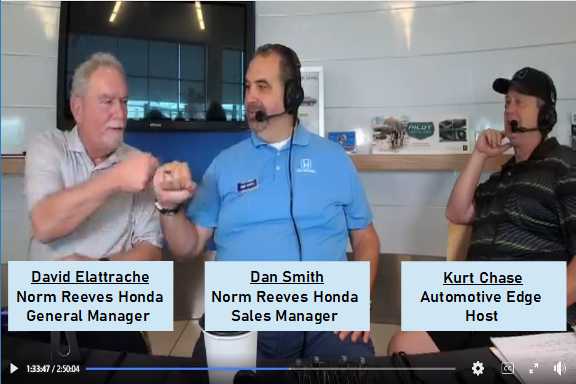 Obliquely referring to Ed Wallace as Elattrache’s buddy, Chase expressed displeasure with the comparative frequency and duration of Elattrache’s appearances on the Automotive Edge.  Sorry Kurt, David just isn’t that much into you. Not that that should surprise Kurt, as Freeman's Toyota / Honda General Manager Dane Minor cheats him on even worse with a love square.

Towards the end of the show, Norm Reeves Honda Sales Manager Dan Smith reappeared on the show and offered an exclusive deal to the Automotive Edge audience.

Despite Kurt Chase’s grousing, Elattrache appeared on next week’s edition of Wheels (June 25, 2022). And while he did co-host for the full five hours, Elattrache offered no deals to the Wheels’ audience. Similarly, General Manager Dane Minor offered nothing to the Wheels’ audience when co-hosting Wheels the week prior (June 18th), while at the same time offering ♫ preferential treatment to WBAP Car Pro audience members who shop his Freeman Toyota dealership.

Given all of the above, the lesson for those with enough poor judgment to purchase a vehicle from a sponsor of Ed Wallace is that one must mention the host of a car broadcast against which Wallace competes in order to receive the best deal. Mentioning Ed gets you nothing.