The July 22, 2022 edition of Inside Automotive continued to promote the false narratives fabricated by the J6 Committee. In this case, Ed Wallace links to an MSN hosted article that was created by the far-left HuffPost web site. It is titled "More Jan. 6 Witnesses Back Up Account Of Trump's SUV Meltdown”. Despite what the title claims, the article states that only one such ‘witness' was presented during the July 21st hearing, which was retired D.C. Police Sgt. Mark Robinson. Robinson only claims to have been told that there was a "heated argument". There is no mention of striking an agent, lunging for a steering wheel, or having a meltdown. Furthermore, Robinson was in a different vehicle and did not personally witness the event. In short, hearsay is being used to “back up” Cassidy's second hand hearsay, and their tales are very different. In response, HuffPost distorts "heated argument" into "meltdown" to minimize the discrepancy, which Ed Wallace eagerly parrots.

HuffPost article (as hosted on the MSN site):

in [SIC] recorded testimony the committee aired Thursday, retired D.C. Police Sgt. Mark Robinson detailed what he learned while sitting in the lead vehicle of the presidential motorcade that day alongside a Secret Service agent.

“The only discussion I received was that the president was upset and was adamant about going to the Capitol, and there was a heated discussion about that,” he said of information he got while sitting in the other car. It was also described to him as a “heated argument,” he said.

So, Wallace promotes an article whose title is not supported by its contents. This new article undermines Wallace's original false narrative link label that states Trump struck a Secret Service agent. All of which is based upon hearsay gathered by a committee that was selected solely by Democrats and that allows no adversarial cross-examination. 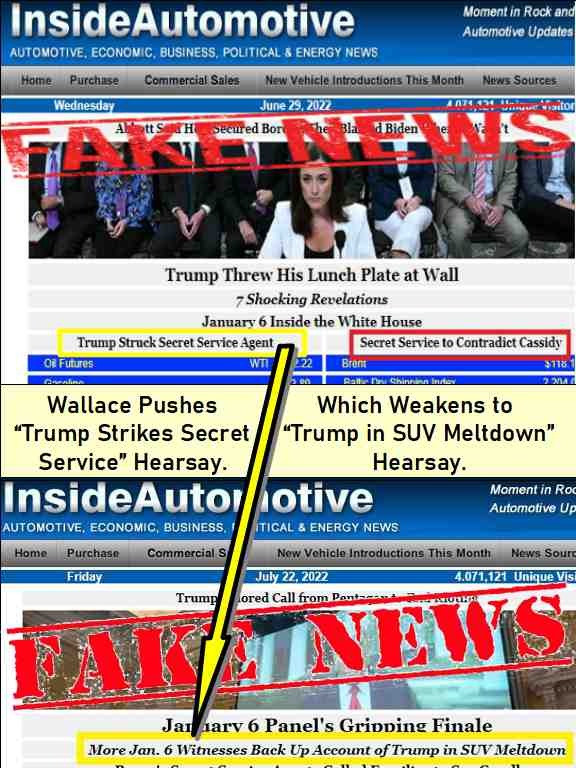 Cassidy’s testimony was June 28th. It is July 23rd. The J6 Committee still has not called for the Secret Service agents who can provide first hand testimony. They have offered to testify under oath. But like Ed Wallace, the J6 Committee is not interested in the truth. For their purposes, “♫ let the truth take a long, long hike”.