Four months have passed since Outside Automotive reported on the bias of the Wheels with Ed Wallace show opening. In the prior analysis of the period from July 2021 to April 2022, Ed Wallace’s show opening is exposed as a nakedly partisan exercise that derided Republicans 91% of the time over those ten months.

Embarrassed by his own record, Ed Wallace at first denies his partisan conduct during the following show (2022MAY07). When that denial fails, Wallace ♫ claims the next week that he is “not necessarily a Joe Biden fan" (2022MAY14). Never mind that Wallace avoids even the mention of Joe Biden’s name within the few weak barbs that were nudged Biden’s way. In these instances, the claimed displeasure is related to Biden’s age and not to any policy differences.

As a result of the above exposure, Wallace began to more frequently target Democrats within the Wheels’ introductory snark. 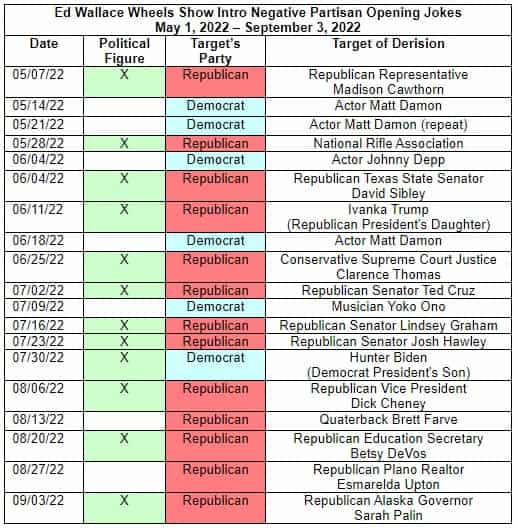 This shift in show content is a tacit admission of bias, as the above table documents that the partisan snark targeting a Democrat suddenly increased in frequency from 9% to 32% after the aforementioned May 3, 2022 report. 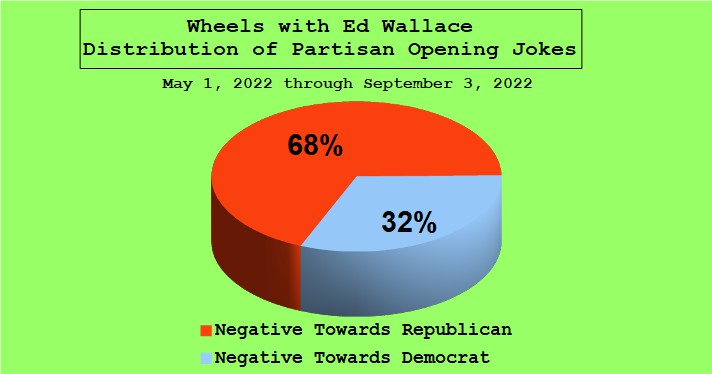 But as with all things 'Ed Wallace', a closer examination reveals that things are not as he presents. This more balanced distribution of partisan snark is yet another deception. If one looks at the targets of the snark, only one of the six Democrat references was to a political figure (Hunter Biden). The rest are merely performing monkeys (Matt Damon, Johnny Depp, Yoko Ono) who sometimes advocate Democrat causes. And none of these six barbs are associated with their policy positions.

Conversely, Wallace uses the show's introduction to push his political agenda by targeting prominent conservative political figures for eleven out of the thirteen Republican references. And many of those barbs are critical of conservative policy. Furthermore, when one eliminates snark which targets figures who are not primarily known for their political associations, the KLIF Wheels’ show opening partisan tilt against Republicans actually increased from 91% from the first ten months to 92% over those subsequent four months. 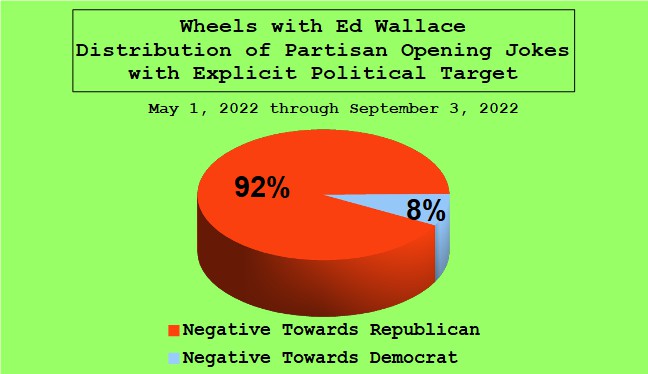 To conclude, the reality is that Ed Wallace manages to CONNECT the partisan snark over the last FOUR months in a manner that presents a mirage of a less biased posture.