The KLIF Wheels with Ed Wallace radio show usually opens with what are allegedly jokes.  In practice, the bulk of these opening “jokes" consist of humorless, bitter snark.  The following table records every instance over the past ten months of a snarky comment made during the show's opening that is targeted at a partisan person or persons.  The table omits the snarky comments that were deemed to not be a swipe targeting one side of the political divide. 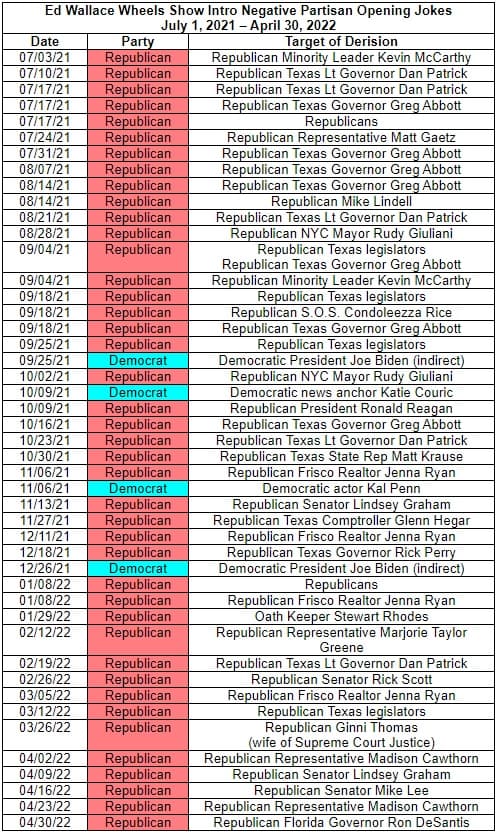 Over the ten-month period recorded in the above table, there were a total of 46 instances of a negative sentiment targeting a member or members of either the Republican or Democrat Party.  The top three most frequently mocked individuals were:

On one hand, it is not surprising that a Texas-based radio show would have the highest Texas state office holders such as Republican Texas Governor Greg Abbott and Republican Texas Lt Governor Dan Patrick as the gold and silver medallists in the Ed Wallace negative reference recipient rankings.  On the other hand, it is quite odd that Frisco real-estate agent Jenna Ryan takes the bronze medal of those on the receiving end of Ed Wallace's venom.  While Ryan pleaded guilty to a Class B misdemeanor for parading, demonstrating or picketing within a Capitol building and served 60 days in prison, she does not hold a public office and she has no leadership position within the Republican Party.  Perhaps Jenna Ryan should channel this Alexandria Ocasio-Cortez's tweet in handling Ed Wallace's creepy weirdo attention. 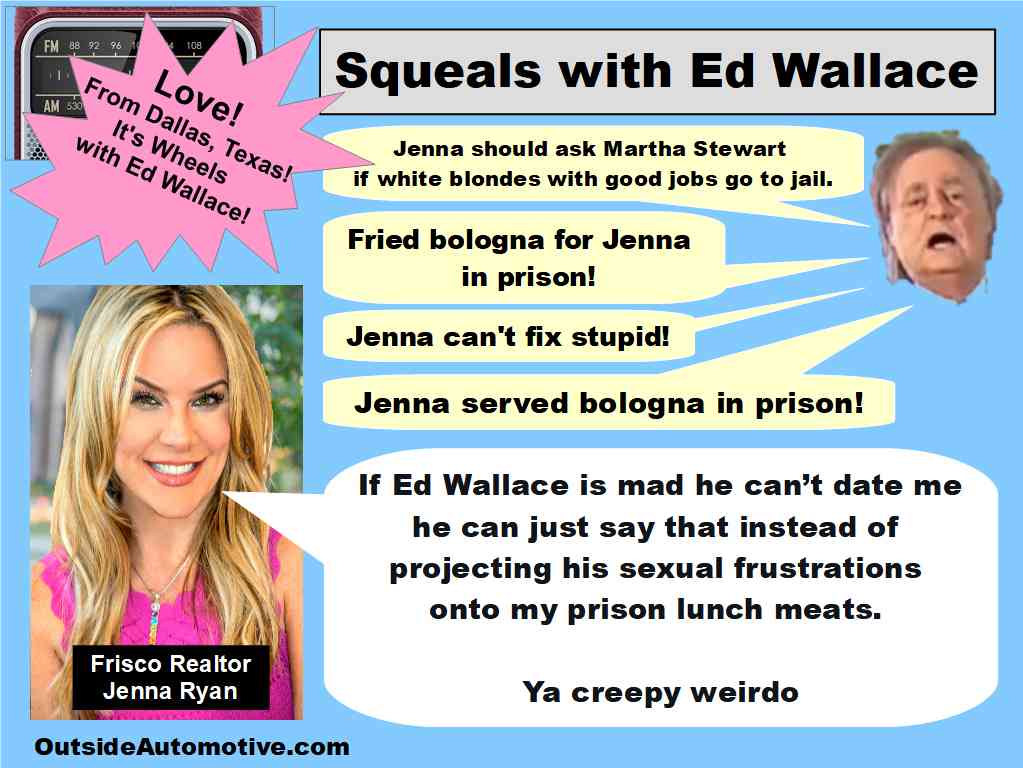 Conversely, over that same time period that includes Democratic Texas State Representatives fleeing the state to pass coronavirus to the White House staff, Democratic Vice President Kamala Harris world stage failures, the resignation of Democratic Houston Elections Administrator Isabel Longoria who skipped counting 10,000 votes, and the mainstream media finally admitting that Hunter Biden laptop was not Russian misinformation, Ed Wallace uttered partially zero snarky comments about all Democrat shenanigans happening both within and without of Texas.  What little snark fell a Democrat’s way, half the cases did not involve a Democratic office holder (Couric, Penn).  And, the two references to Democratic President Joe Biden were extremely oblique.  Wallace could not even bring himself to script the mentioning of Joe Biden’s name.  One snarky reference to Democratic Historian David McCullough's criticism of Biden is expressed by assigning a fictitious book titled “Steering America's Future Without a Rudder” to McCullough.  The other snarky reference to Biden states that nobody who has been on Medicare for a decade should be president, again not mentioning Biden by name.

In summation, Ed Wallace’s partisanship is exposed by the fact that the Republicans were recipients of 42 of the 46 instances of negative political snark, while Democrats received only 4 such instances.  Sentiments do not distribute 90+% negative to one party by accident.  Wallace pleads repeatedly that he only reports the truth and does not censor show content due to partisan interest.  Yet, by his own actions, Ed Wallace reveals himself to be a Democratic National Committee propagandist. 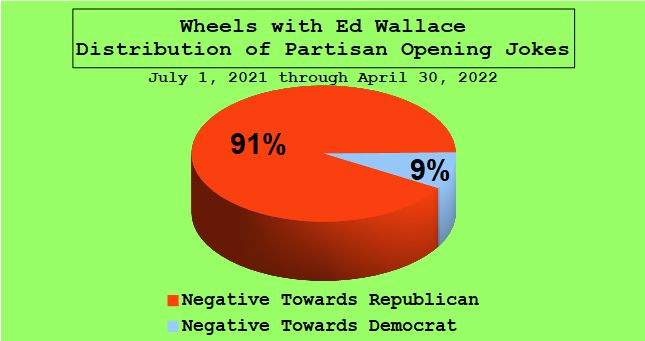 On the Saturday edition of Wheels (May 7, 2022), ♫ Ed Wallace declares that show’s opening as his “most political opening ever”.  The motivation for Wallace’s 2022MAY07 declaration is obvious.  It was in response to the 2022MAY03 Outside Automotive story that exposed Wheels with Ed Wallace’s show opening as a nakedly partisan exercise that derided Republicans 91% of the time over the past ten months.

♫ Wallace’s alleged “most political opening ever” opening consists of three snarky comments.  The first snark muses that “social media” is mislabeled as all the hate shows it to be “unsocial”.  That is not a political observation.  The second snark mocks Republican Representative Madison Cawthorn over a sex video released this week.  That is a politically motivated attack.  Finally, the third snark was a generic swipe at all political leaders being less credible than the Kardashians.  This third snark is apolitical, as "it is not linked to a particular political party” as per the Collins English Dictionary.  So, the opening that Wallace declares as his “most political opening ever” is only one third political (33.3%) snark.  And that political third, all of it (100%) mocked a Republican.

If one looks at the recorded history of the past ten months, one quickly finds that the opening of July 17, 2021 was Wallace’s most political.  This opening consists 100% of political snark (three out of three), all mocking Republicans.

In summation, given the additional week, Ed Wallace’s partisanship is now further exposed by the fact that the Republicans were recipients of 43 of the 47 instances of negative political snark, while Democrats received only 4 such instances.  Sentiments do not distribute 90+% negative to one party by accident.