Every week around 9:20AM CST, KLIF's Wheels with Ed Wallace airs a segment called the Backside of American History (BOAH).  Until now, these works of a car salesman turned audio CliffNotes transcriber of books written by actual academics have not merited any comment.  And, arguing interpretations of history on a blog seems an exhausting and fruitless exercise.  So, as Ed Wallace’s fellow scrivener would express it, “I would prefer not to”.

Putting Herman Melville references aside, there is a line that demands scrutiny within the BOAH segment that aired on May 14, 2022.  During the retelling of the historical events surrounding the Salem witch trials, Ed Wallace suddenly veers into the arrest of a teenager who brought a device that resembles a time bomb to school.

“There is no doubt that the Salem witch trials were the rock on which theocracy in America was permanently shattered.  And because we have never come to grips with the actual murder, we call it legal executions, of twenty women and men in 1692 New England.  Somehow we continue to be afraid of those shadows in the forest.  It’s just not Satan anymore.

Instead, it's anarchists.  It’s communists.  It’s agitators in the sixties.  It’s a teenage kid building an electronic clock and taking it to school in Irving.  And so we have our witch trials, even to this day, in America.

That is what happens when nobody knows the real backside of American history."

This BOAH segment was first aired in 2015, soon after the story of Ahmed Mohamed, better known as “Clock Boy", went national.  Clock Boy removed the electronic guts of a mass produced Radio Shack clock from its protective plastic encasement, placed these guts into a pencil box, and bandied about the device at school until a reaction was provoked.  Opposite of Wallace's assertion, no clock was built.  Instead, Clock Boy un-built a clock to create an electrocution hazard.  This engineer’s post (“Reverse Engineering Ahmed Mohamed’s Clock… and Ourselves.”) provides detailed proof that Ahmed built nothing.  And, the following is a video presentation of the same information exposing the hoax.

Again, Clock Boy built nothing.  He disassembled the case enclosing a commercial available product and put its unaltered contents into a commercially available pencil case.  The following video shows this being accomplished in roughly 20 seconds.

In further validation of the above engineer’s research, the local ABC affiliate news confirms that no clock was built.

”Two months after Ahmed's arrest, the family's attorney sent letters to city and school officials that demanded they apologize and pay $15 million to stave off a lawsuit.”

Ultimately, the criminal charges against Clock Boy were dropped.  Clock Boy promptly sued everyone (city of Irving, Irving ISD, McArthur High School principal Daniel Cummings, various media pundits, ...).  All of these lawsuits were lost, the last lawsuit being dismissed with prejudice in 2018.  Why?  Because the whole narrative that Clock Boy was a persecuted victim of Islamophobia was false.

Ed Wallace is not one to let a useful false narrative go to waste.  If the story's theme conveys that America is an unjust and racist nation, then Wallace will push it.  That was the case when Wallace headlined the obviously ridiculous claim that whips were being used by the border patrol.  And that was the case when Wallace repeatedly stated that Daunte Wright was pulled over by police due to a hanging air freshener despite knowing otherwise.  These false narrative cases of Ed Wallace are legion.  As are the dodgy Backside of American History segments that this modern day Bartleby pulls out from his backside. 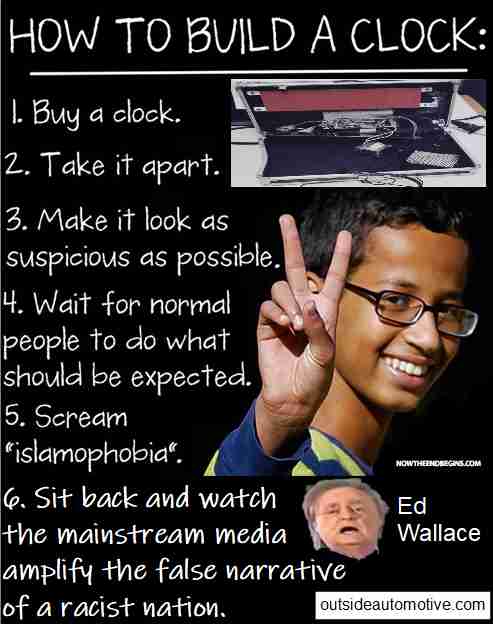