The news of an arson attack on June 7, 2022 pro-life pregnancy center did not receive a link within any Inside Automotive edition.

In the June 9, 2022 edition of Inside Automotive, Ed Wallace links to a news article reporting that a gun-wielding assassin arrived at the home of Supreme Court Justice Kavanaugh.  The would-be assassin was upset with the leaked SCOTUS opinion that curtails abortion rights.  The article’s link placement was located far down the web page, in the 25th slot.

Need another example?  Twice within the past seven days, Wallace’s Inside Automotive links to a story regarding would-be assassin John Hinckley Jr.

During the August 17, 2021 Wheels show, Wallace lauded a bumper sticker that yearned for assassin Lee Harvey Oswald at a time Republican Richard Nixon was President.  Wallace recently ♫ repeated this appreciation for that bumper sticker during his May 28, 2022 Wheels show.  Judging from the giggling reactions of Kelly Wolfenberger (General Manager Sewell Audi of McKinney) and Gina Collins (General Manager Sewell Infiniti of Dallas), the Sewell Automotive Company might regard the assassination of a U.S. president as an appropriate topic for mirth.

The following image comes is from a 2013 KEPR news story out of Oregon.  Let's hear joy-boy Ed Wallace laugh when Obama is the target. 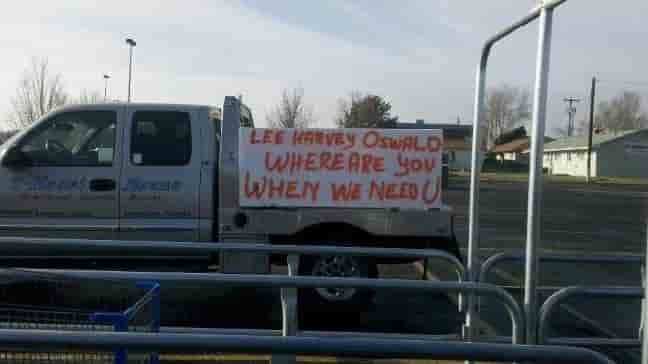 Debuting far down in the 60th slot, the June 10, 2022 Inside Automation edition linked to an editorial posted on the far-left Mother Jones web site that spoke to the assassination threat to Justice Kavanaugh.  While condemning that political violence, the editorial only provided additional examples of events that the left typically spins to condemn those on the right.  This is the same misdirection that Wallace frequently engages, and is likely the reason he chose that editorial.

Also debuting in the June 10, 2022 Inside Automation edition was a link to another story associated with the security of Supreme Court justices.  Found down in the 42nd slot, the link is to a tale that Speaker Pelosi is working on a Supreme Court justice security bill.  Wallace never linked to news that on May 9, 2022, the U.S. Senate unanimously passed a bill that bolsters security for Supreme Court justices.  Wallace never linked to news that Democrat Speaker of the House Pelosi blocked voting on that Senate bill for over a month.  Simply put, Ed Wallace does all he can to never link to news that exposes the poor conduct of his fellow travelers on the left.  His actions reveal that any expressed concerns regarding the lefts politically motivated violence is a pretense.

There was no mention of the would-be Supreme Court justice assassin or the House blocking the Senate’s SCOTUS protection bill during the June 11, 2022 edition of KLIF Wheels with Ed Wallace.

Be it a would-be assassin of a conservative Justice or the BLM riots, Ed Wallace’s actions reliably push the narrative that leftist violence should either be ignored or be considered “mostly peaceful”.