The July 22, 2022 edition of Inside Automotive included zero links to the news of an attempted assassination of U.S. Representative (Republican-NY) Lee Zeldin. At a July 21st campaign event for Zeldin's run to be Governor of New York, a man jumped on stage and attempted to stab Zeldin with a self-defense weapon. 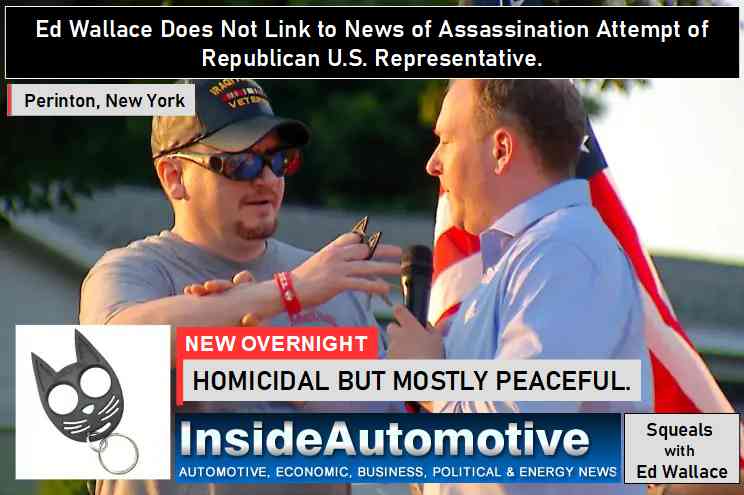 Ed Wallace did not link to this story, despite being widely reported by the mainstream media. This is yet another case where Wallace minimizes, or even completely ignores, violence by against conservative targets. Some prior examples are:

Ed Wallace’s actions give the strong appearance that he considers this politically motivated violence against conservatives as “Homicidal, but Mostly Peaceful”.

Arriving a day late, a link to an article covering the assassination attempt on Zeldin was included within the July 23, 2022 edition of Inside Automotive. As per Ed Wallace's usual curation standards, the chosen article downplays the attack on a conservative. The weapon is not mentioned until the seventh paragraph. And none of the article’s pictures show the weapon. Furthermore, NBC News posted the chosen article on July 21, 2022 at 10:52PM CDT, which means that that news was there for Wallace for inclusion within the July 22, 2022 edition of Inside Automotive.

Every weekday at the tail of his Automotive Updates segment, Wallace ♫ shills his web site by declaring: “Finally, for the latest news from the automotive, economic, business, political and energy world, it is there for you on Inside Automotive dot com.” That is unless that latest news contains a truth that is inconvenient to the narratives that Ed Wallace is pushing. Then, that “latest news” becomes “news delivered late”, if it is to appear at all.