During the May 28, 2022 edition of WBAP's Car Pro Show, host Jerry Reynolds reveals that when he ran a Garland, Texas Ford dealership, he entered into an agreement with a nearby Mesquite Ford dealership to not to hire (poach) each others employees.  This might be an admission of a possible violation of federal antitrust laws.

”But the company and its employees should take care not to communicate the company’s policies to other companies competing to hire the same types of employees, nor ask another company to go along.”

”Agreements among employers not to recruit certain employees or not to compete on terms of compensation are illegal.”

”And if that investigation uncovers a naked wage-fixing or no-poaching agreement, the DOJ may, in the exercise of its prosecutorial discretion, bring criminal, felony charges against the culpable participants in the agreement, including both individuals and companies."

When WBAP Car Pro Show sponsor Dane Minor was on the air with Reynolds, Reynolds shared ♫ an anti-poach hiring agreement anecdote.  Current General Manager of Freeman Toyota Dane Minor quickly endorsed Reynolds’ actions by saying “that’s the right way to do it” and that he has friends in the industry that continue with that practice.  Then, ♫ Dane Minor shared his own anecdote of when he unsuccessfully attempted to execute an anti-poach agreement with a competitor.  Minor added that while this event happened a long time ago and he no longer engages in such activities, he did get his “pound of flesh”.

The above anecdotes should be especially troubling for those in the DFW area, which is a tech hub.  One might recall that the Department of Justice reached a settlement with six high technology companies (Google Inc., Apple, …) that prevents them from enacting anti-poach agreements.  The wages of many technology workers could be suppressed if major DFW employers took actions similar to that which Reynolds and Minor describe.

It is uncertain if the referenced antitrust laws of today were applicable during the times when the events of the above anecdotes took place.  And even if applicable, any legal jeopardy from alleged antitrust violations would have likely expired long ago due to the statute of limitations.  But, there may be a moral issue with these car dealers having pursued anti-poach hiring agreements instead of offering compensation that was sufficient enough to retain staff.

In addition to the WBAP Car Pro Show, Dane Minor sponsors KLIF Wheels with Ed Wallace, as well as co-hosts Wheels for its full five hours (three times this year to date).  Although present with an open microphone, Minor did not articulate any counterpoints when Wallace promotes narratives on parental school curriculum input, border security, and immigration that conflict with the issue positions advocated by the Gateway Church, as per the church’s Vote Under God web site.  Yet, ♫ Minor did speak up in support of Wallace’s condemnation of radio host Dave Ramsey charging market rates for his rental properties, accusing Ramsey of being a hypocrite for evicting tenants while claiming to be a Christian.  And then, at Wallace’s prompting to reinforce his Christian bona fides, Minor attested that he goes to church regularly.

Is there a moral issue with Gateway Church Elder Dane Minor spending his time and advertising dollars on a show that pushes an agenda that is largely in opposition to that of his church?  While the statute of limitations alleviates any imagined legal concerns, perhaps church Elder Dane Minor should be reminded that there is no time expiration for violations of the following statue of limitations: 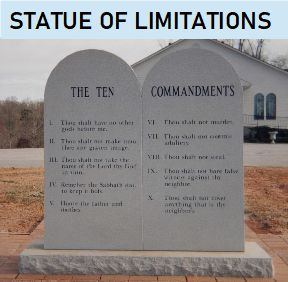