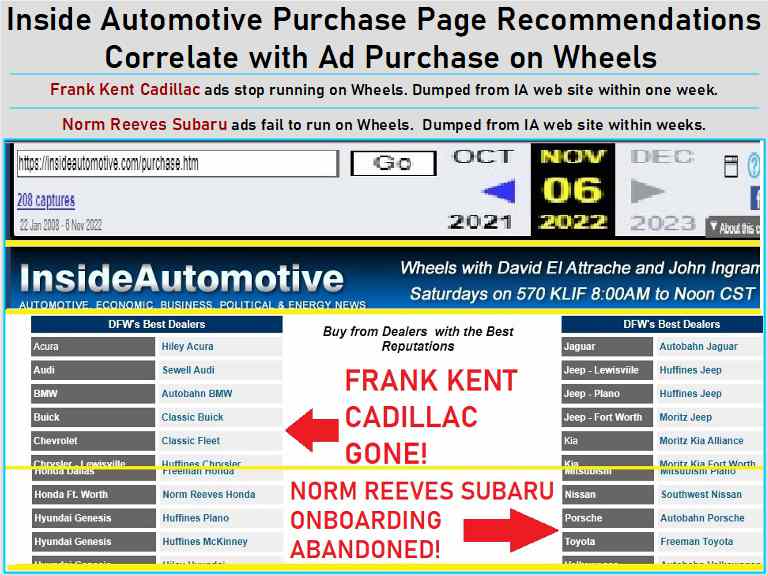 The most conspicuous departure was that of Frank Kent Cadillac. Since at least as far back as 2008, Frank Kent was the sole Cadillac dealer listed on the purchase page. And every week, KLIF’s Wheels with Ed Wallace ran commercials (usually two) for that dealer. Well, that changed last week. Despite having ads on Wheels run on October 29th, Frank Kent Cadillac was off the IA purchase page on or before November 1st. As foreshadowed by that event, no advertisements for Frank Kent Cadillac ran at all on the following show of November 5th.

While one can guess at the reason for the loss of another long-term sponsor, one solid conclusion can be made. Ed Wallace’s repeated assertion that dealers do not pay to be featured upon the Inside Automotive purchase page appears to be a lie. As soon as the ad revenue for Wheels ended, so ended Frank Kent Cadillac’s inclusion amongst Ed's list of “DFW's Best Dealers".

A second departure last week from the purchase page was that of Norm Reeves Subaru Superstore Rockwall. It replaced Sewell Subaru on the page in mid October, but the dealership never ran advertisements on Wheels. However, with its general manager (John Ingram) slated to takeover the show starting in November, it seemed that his dealership was in the process of being on boarded onto the show. Yet, by November 4th, Norm Reeves Subaru was dumped from the IA purchase page.

So, why does the Inside Automotive web site omit the Wheels co-host’s dealership from its sales lead generation page? Ed Wallace owns Inside Automotive and produces (perhaps owns in full or part) Wheels. And why does Norm Reeves Subaru not sponsor a car-dealer-promoting radio show that has its general manager as co-host? The answers to these questions are likely quite interesting.